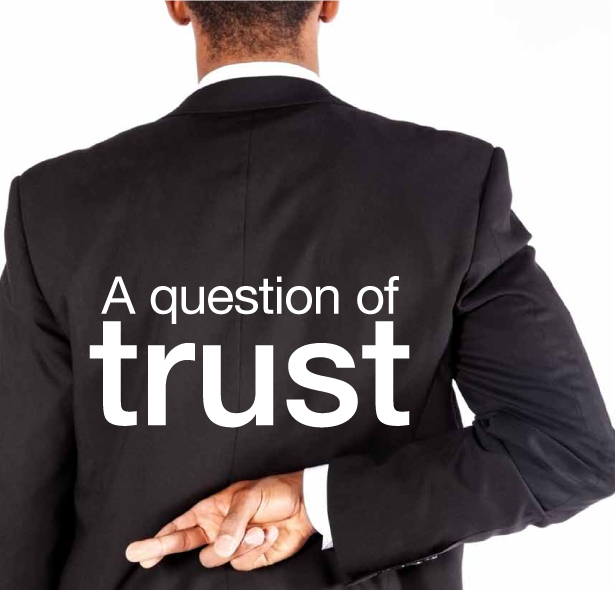 A recent article depicting insurance as one of the least trusted industries prompted me to write an article for Risk SA in the July 2014 issue. In the event that you think it’s work circulating there is a link to that PDF version at the bottom of the page.

The article on the most (and least) trusted professions in South Africa was originally written by a fellow called Quinton Bronkhorst for Business Tech. I can only assume he had to wade through tons of mind-numbing figures before getting to the table below, which I think you’ll agree is quite distressing if you’re in journalism, law enforcement, insurance or politics. 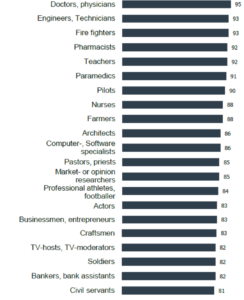 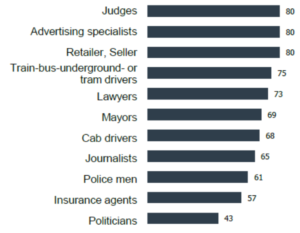 The original report was produced by global market research company, GFK. I always take these global studies with a pinch of salt because the samples used to derive the information are often relatively small, particularly once you drill down into the South African specifics. In this particular instance, 28 000 people were interviewed around the world. The number included 1194 South African respondents.

The numbers in the table indicate that of the total number of people interviewed, a specific percentage trusts the specific profession. This means effectively that out of 1194 South Africans, 95 per cent said they trust doctors compared to only 43 per cent who trust politicians. It seems likely that 43 per cent of the respondents were politicians. Incidentally, if one benchmarks SA against other countries – politicians, on average, have a trust level of 31 per cent. We are more trusting of our elected officials. I guess that is borne out of our recent election results where a slew of corruption charges against some individuals appear to be less concerning to the populace than the dress code in parliament.

Also worth noting is that 5% of the respondents don’t trust anyone.

As an insurance professional, I took serious umbrage to the notion that we only scored 57%, especially when one looks at the overall context, even cab drivers, whom I assume are actually mini-bus taxi drivers, scored higher than the insurance industry. For goodness sake, even South African policemen fared better than insurance agents. .

It would be far too easy for us to dismiss the insurance numbers by simply sticking the whole industry into the grudge purchase box. However, I don’t believe the nature of the product or service has anything to do with trust. In fact, if trust were inextricably linked to the nature of the service, even doctors would find their score slipping to the bottom of the table. Not too many people enjoy a visit to the doctor, unless you are a hypochondriac or a medical sales rep.

If the negative perception is not related to the nature of the service then perhaps it is related to the dreaded claims rejection? Shortly after I read the Trusted Professions report, I noted that the Ombud for the short-term insurance industry had also published some figures. The Ombud is a free resource for consumers who feel their claims have been unfairly rejected. In 2013, he received just under 10,000 complaints. This is a pretty big number but the reality is that out of almost 2.7m claims, less than 0.4% resulted in a dispute with the consumer.

So if the grudge purchase factor and claims payments are not the cause of our risky reputation, what remains?

Some years ago, I was privileged to attend a presentation delivered by market leader, Peter Todd. In his presentation he spoke of insurance professionals having a noble purpose. The word noble or nobility, generally conjures up all sorts of regal, even saintly imagery. This struck me as strange as many of the professionals I had worked with in the industry over the years knew the risk transfer business inside out, but didn’t exactly fit the knightly bill.

Todd’s reference to our noble purpose had quite an impact on me. Attention had been thrown on the fact that much of the negative perception in our industry is self-perpetuating, partly through the way some insurers market their services but largely due to the way the individuals in the industry carry the message.

There isn’t a great deal we can do to halt the commoditisation of insurance products and I guess to some extent, buying insurance will always largely be about the premium. I do however believe there is something we can do about the way we carry our noble purpose message every day.

I’ve worked in a big insurance company, a few global reinsurance companies, a couple of Underwriting Agencies and more recently, in a local brokerage, and I noted a few things that many of these firms had in common:

The talk made me think about how I perceive the industry that I’ve earned a good living out of over the past 23 years. It also made me think of the enormous impact the industry had on my kidneys and liver for the first 10 years, but that is a bleary-eyed, dialysis infused story for another time.

I was transported back in time to the moment I started in insurance. I recalled being almost immediately embarrassed by my chosen profession. I discovered in my early 20’s, at a very impressionable age for a young underwriter, that insurance was not as sexy as depicted in the brochure. In fact I remember concocting a joke that elicited much mirth at insurance functions. I’d introduce myself as an underwriter, then I would quickly qualify that an underwriter was like an undertaker. The only difference being that an undertaker had clients that were livelier. This joke, it transpired, was not very funny to non-insurance people, or to undertakers. My colleague, Ed Jordan recently shared a story with me that I believe to be more apt. Upon arrival at a retirement home to deliver a load of baked goods (a charitable initiative of SHAs), he was confronted by an old fellow who commented on the use of the word underwriter on the side of our team van. “Is that like an undertaker?” muttered the old boy. “Similar, but we take care of you whilst you’re alive” responded Ed.

Unfortunately it would appear that this vocational embarrassment is not unique, and still exists in today’s insurance industry. Some would argue that the sector is filled with brilliant products that no one really wants to buy, sold by people that don’t really want to sell them. Not only a grudge purchase but a grudge sale too. Somewhat of a miracle then, that the combined short and long-term industries produce almost 20% of the country’s GDP and employ over 100,000 people.

The 2013 KPMG report draws attention to how the insurance industry is trying to clean up its image. R2.1 bn in fire and hail claims were paid in the last quarter of 2012 alone. Without that valuable service many people would have lost their homes, cars and even their jobs. If one adds to that the number of families that benefited from life policies (R6.8 bn across the whole year) it becomes apparent that society would actually grind to a screeching halt without the risk transfer industry.

The KPMG report is extremely comprehensive but I very much doubt that the majority of people employed in the insurance industry even know of its existence, let alone read it. So if we as an industry don’t know about the impact of our noble purpose, how can we expect this from the begrudged buyers?

A political party recently used the phrase ‘A good story to tell’ in its 2014 election campaign. The insurance industry is filled with ‘great stories to tell’ but if we don’t tell them no one else will. We will be doomed to hover around the bottom of the Trusted Professions list, saved only from last place in morbid hope that our politicians will continue to disappoint the electorate.